As Yammer gets further integrated in Office 365, administrators can manage key aspects of the Yammer service from Office 365, including identity, domain and license management.

Per User Licensing On January 15, we announced that you can manage Yammer licenses in Office 365, and that administrators will have the option to block users without licenses by the first quarter of 2016. In the first phase Yammer licenses can be modified at the user level, and the Office 365 Suite experience will reflect this choice. Today, we are very happy to announce that the second phase is now available, giving the ability for administrators to block users without Yammer licenses

Domain Management In addition to this, over the coming weeks, administrators will be able to manage Yammer domain settings in Office 365. When a domain is added or removed in Office 365, those domains will be automatically added to or removed from the corresponding Yammer network. If your Office 365 tenant has additional domains that have not yet been added to Yammer those domains will be automatically synchronized to Yammer as part of this change. More information about domain life-cycle management will be available soon. 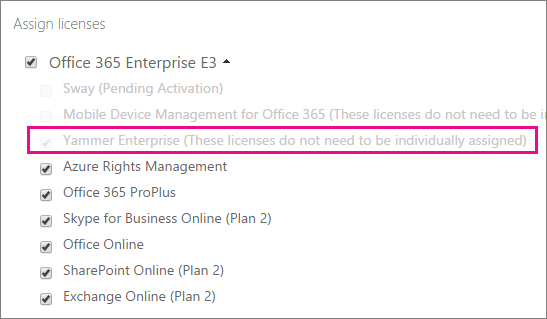 Going forward, Yammer licenses can be assigned per user, as the following screenshot shows.

You can assign licenses to users in the Office 365 admin center or by using Windows PowerShell cmdlets for Office 365.

Below are some example Windows PowerShell script snippets that you can use to manage Yammer licenses. Use them to develop a complete script for your organization.

It takes just a few steps to start blocking Office 365 users who don’t have Yammer licenses. However, turning this setting on can accidentally disrupt users’ access to Yammer. So before you begin, do the following to make sure your Yammer users can continue working smoothly:

You must be a global administrator on Office 365 who was synchronized to Yammer as a verified admin to perform these steps. To check if your account was synchronized, you can go to the Network Admin page on Yammer and check the Admins section. Global administrators will sync to Yammer only if their user principal name (UPN) in Office 365 matches a domain on Yammer. The following screenshot shows what a synced admin looks like on the Admins page in Yammer.

If you ready to block users who don’t have Yammer licenses, follow these steps.

Q: Why are you adding this capability to assign Yammer licenses per-user?

A: Customers want to provide Yammer to a subset of users in their company – typically for a geographical or team-by-team rollout. We have specifically heard several requests from customers to have control over which of their users can see the Yammer tile in the Office 365 app launcher. The ability to assign Yammer licenses per-user provides this capability in a way consistent with other Office 365 services.

Q: How does this affect Yammer users who sign-in with their email and password?

A: Licenses will be enforced only for users who sign-in with Office 365 identity, because users with legacy Yammer identity (email and password login) cannot be managed in Office 365.

Q: What if I do not want anyone in my company to use legacy Yammer identity?

A: You can Enforce Office 365 identity for all your Yammer users.

Q: How will Yammer per-use licenses roll out to customers?

A: All Yammer networks that are connected to Office 365 tenants will get this change automatically.

Q: How can I tell if all of my Yammer users have accounts in Office 365?

A: You can export your list of users from Yammer and check for users who are not in Office 365. For more information, see How to audit Yammer users in networks connected to Office 365.

This site uses Akismet to reduce spam. Learn how your comment data is processed.